This year’s Excellence in Holography awards, organised by industry trade body International Hologram Manufacturers Association (IHMA), continue to reflect an expanding industry that sees commercial innovation and creativity at the heart of future growth and development.

Marking the pinnacle of success for those at the forefront of developing innovative or commercially viable holography products or techniques over the last 12 months, the awards come as the sector has seen achievement during difficult and challenging times.

The judges were impressed by the fusion of traditional hologram concepts with other technologies across a crop of high-quality category winners, who included:

Germany’s foil and security feature producer KURZ was flying high after winning the ‘Innovation in Holographic Technology’ for its KINEGRAM DYNAMIC technology that showcases innovative surface-applied security features for banknotes. The technology, launched earlier this year, is based on micro-lenses which, in combination with diffractive features, provides security effects with movement, colour change and depth that can be checked by the public to confirm a banknote’s authenticity. The Reserve Bank of Malawi’s new 5,000 Kwacha features a LEAD foil stripe from Louisenthal, which appears on the left of the notes and displays a combination of vibrant effects and tones created from holographic and micro-mirror technologies. The top shows an animated sun, true colour portrait of former president Dr Banda, denomination value, a three-dimensional fish from Lake Malawi with depth background, ‘Reserve Bank of Malawi’ and RBM logo. This foil shows achromatic and rainbow effects when the note is tilted.

The judges were particularly impressed by the high public recognition the feature provides together with its application as a strong security and authentication device to thwart banknote anti-counterfeiting.

IDEMIA’s LASINK Helios technology is linked to a DOVID (Diffractive Optical Variable Image Device) and combined with holographic technology displays striking optical effects, such as colour variations of the portrait including a full polychromatic view with true colours, which vary depending on the angle of view.

Easy to inspect, resistant to multiple types of fraud and durable, the use validates both secondary and main portrait images on ID documents, thus confirming the identity of the document holder – both images are interlinked to make forgery virtually impossible, deterring any attempted fraud. The winner of the ‘Best Origination’ went to IQ Structures for IQS Singularity, a commemorative hologram paying tribute to the first ever images of unveiled earlier this year of Sagittarius A, the supermassive black hole at the centre of our Milky Way galaxy.

The hologram features a full parallax 3D CGH image of a black hole. Designed as a banknote stripe, this hologram presents several innovative technologies, including 3D text and microtext, an animated projection, colour kinetic effects and an full 3D image of a black hole displaying, at different angles, a curved disc above and below the eliptic plane and warping of the geodetic spacetime lines of gravity.

Korea’s Hologram Center scooped the top spot in the ‘Best Display or Emerging Technology Application of Holography’ for its ghostly holographic illusion. Developed as an ‘stunning’ 3D effect, the holographic illusion contains two colourful traditional Korean terracotta figurines – a boy and a girl – behind a glass plate. This presents an alternative visual promotional and marketing technique using full colour Denisyuk holograms mixed with elements with the help of special lighting – the concept is seeing possible use in advertising to promote products by creating surprise effects for the public.

The technique can also be used on stage, in shows as a magic trick with many possible variations, including during exhibitions in science museums or in museography to create interactive dioramas and insert objects into scenes. The awards were judged by the IHMA Board, but the membership and conference attendees also got to have a say, voting online for their favourites. The winner of the ‘People’s Choice’ was Computer Holography Centre for a new holographic principle, namely 3D Zero Order Imaging.

The 3D images created through this technique behave like real 3D objects, and appear as images with full parallax both when tilted and rotated. Moreover, the colour of the formed 3D Image, does not depend on the viewing angle, unlike mainstream rainbow holograms. The Excellence in Holography awards recognise outstanding achievement, marking success for suppliers, manufacturers and end-users at the forefront of the sector who have brought forward innovative or commercially viable hologram products or techniques over the last 12 months.

This year’s event, held online 5-6 December, comes as the IHMA continues to develop its role as the leading voice for those involved in global commercial holography.

Chair of the IHMA, Dr Paul Dunn, commended the standard of entries as being of the highest quality, representing an innovative industry at the forefront of the fight against brand piracy and counterfeiting.

In congratulating all the winners, he said: “These awards mark ongoing advancement in the design, development and technology of commercial holograms, which continue to find fresh and innovative ways to add value and heightened levels of security to products used by millions of consumers the world over.”

A recording of the 2022 nominees can be found below: 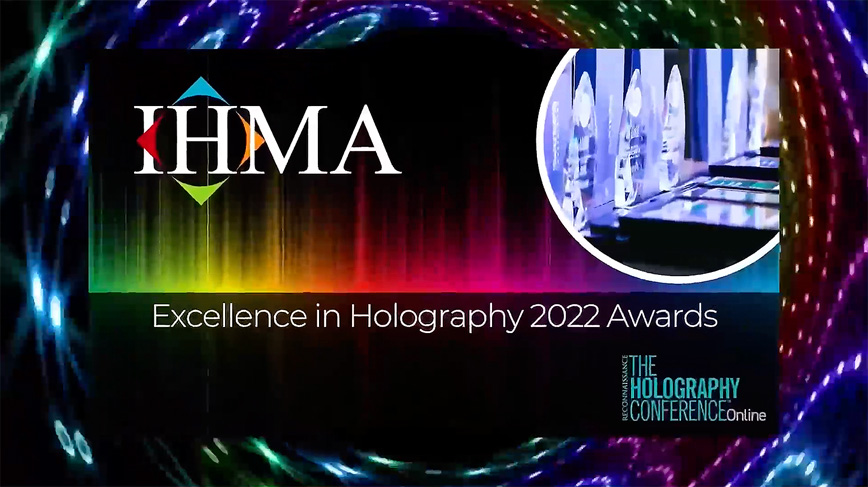 Growth and Development for Holograms in 2023 Despite Challenges

Holograms Continue to Coin It!

Holograms in the Fight Against Cannabis Anti-counterfeiting

Holograms: A Digital And Optical Vision For Industries In Transition